March 14th local time,Cyclone Idai in the central coastal area of ​​Sofala Province in Mozambique, with a maximum wind of 14 (45 m/s) near the center.Cyclone Idai wreaks havoc across Southeast Africa A devastating cyclone has slammed South Eastern Africa claiming lives in Mozambique, Zimbabwe, and Malawi. Red Cross confirmed to Euronews that they expect the death toll to categorically rise in Mozambique while access issues have posed challenges. 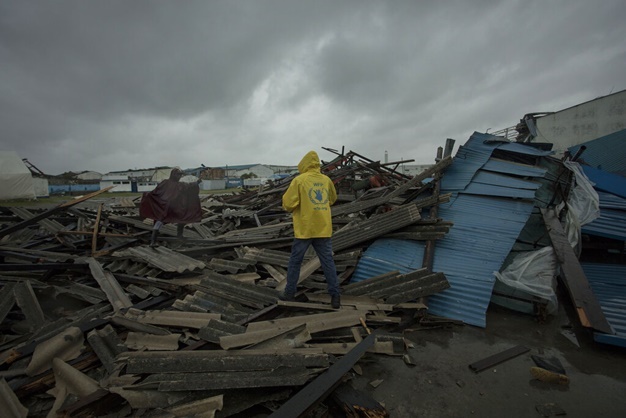 Beira Beira, the second largest economic center in Mozambique, was severely damaged. South African media reported that over 90% of buildings were destroyed and flooded.

The big ship by the sea was blown ashore and the road was broken by the flood.

Zimbabwe government officials said on the 17th that the strong tropical cyclone “Ide” in the southwestern Indian Ocean began to attack the eastern part of the country on the evening of the 15th, killing 40 people and missing hundreds of people.

Previously, the Zimbabwe Department of Public Information released a message through social media that “Ide” has had a serious impact on areas such as Mutare, Qipingji and Chimanimani in Manikaran province in eastern Zhejiang, including the Chimanimani area. The disaster was the most severe and communication was still not resumed. Heavy rains caused landslides and rivers to break down. Hundreds of houses, including a school, were flooded and suffered serious casualties.

The warehouse was destroyed and the losses were heavy.

The Embassy in Mozambique issued a security reminder : According to the Mozambique National Water Resources Bureau and the National Weather Service, the hurricane “Ide” transit brought heavy rains to the northern part of Mozambique, Sofa and Manika and neighboring Zimbabwe The 24-hour rainfall exceeded 250mm, and the traffic in Buzi and Pungue surged, causing massive floods. The competent authorities advised residents of the rivers along the river and downstream to immediately evade the transfer.

The Embassy in Mozambique reminded Chinese-funded enterprises and Chinese citizens in the relevant areas to pay attention to prevent floods after the hurricane crossing, and immediately evacuate the disaster area or transfer to a safe area with high terrain to avoid danger or flooding by flooding and keep the outside world. Contact, strengthen security and protect your life and property. Counselor of the Embassy in Mozambique assisted by telephone: +258-826223383 Mozambique emergency call: 112 or 119

News
Author garyPosted on March 11, 2019
Spread the loveSouth Africa has one of the continent’s biggest and most developed economies. Up until 1994 it was ruled by a white minority...

News
Author garyPosted on March 13, 2019
Spread the loveSouth African homes, offices and businesses have endured a week of daily power cuts, designed to prevent a total collapse of the...

News World
Author garyPosted on March 11, 2019March 11, 2019
Spread the loveA pilot has resigned from South African Airways (SAA) after flying for more than 20 years with a fake licence. SAA said...

Sport Sports
Author garyPosted on March 11, 2019March 11, 2019
Spread the loveSouth Africa has been named host of the 2023 Netball World Cup, beating a rival bid from New Zealand. It will be the first time the tournament...